On Leap Years and Keeping Time

I hope everyone had a good leap day (I know it isn't a holiday, but it is even rarer since it only comes about every four years).  In honor of this, I am discussing why we have leap days and different calendar systems.  I'm not sure what you think, but while I find all of this fascinating, I'm happy this isn't something I study for a living!


There are many different calendar systems that base themselves on the periodicity of different things - most of them having an astronomical origin like the Sun, Moon, or even Venus.  The system in most use today is the Gregorian calendar (at least for international commerce in countries that use a different system).  This is a solar calendar that assigns a date to every cycle of day and night.  This has the advantage of syncing up well with the normal human sleep cycle.  However, the Earth does not revolve around the Sun in an integer number of days.  While our normal year has 365 days in it, it actually takes the Earth 365.242374 days (and the length of a day is slowly increasing) to orbit the Sun.

If we did not correct for that extra fraction of a day, the seasons would slowly start changing later and later on the calendar.  Over an average human lifespan, say 75 years, the equinoxes and solstices (start of seasons) will be a little more than 18 days later at the end of that 75 years than at birth.  This year, the summer solstice is on June 20.  If we never have another leap day, summer will start on Christmas (December 25 is 188 days after June 20) in 776 years.  I know you and I wouldn't be around to see that, but on the human history scale of things this is very significant.

The reason I am going into this on this blog about LIGO is that keeping time is VERY important to us.  It is also important to astronomers in general.  There have been many revisions and changes to the calendar over the years (before the Gregorian calendar, most of Europe used the Julian calendar) and this can complicate figuring out how long it has been since something happened.  So that we don't have to worry about these complications, astronomers use the Julian date system (which is different from figuring out the date on the Julian calendar mentioned above).  This system assigns a date to every day consecutively (there are no months or years).  For example, today is 2455988 (any fractional parts would  correspond to the time of day).  Day 0 is assigned to be January 1, 4713 BC (this is roughly around the beginning of human recorded history).  This makes it is very easy to figure out how many days there have been between events; for example, I was born on 2443787 so I am 12,201 days old (today).  Here at LIGO, we use a system called GPS time which counts the number of seconds since January 6, 1980 (I wrote a post about this here).  In GPS time, I was born on -39489840...  Now I feel prehistoric!

Remember in the first paragraph when I mentioned the day is getting longer?  One of the predictable reasons for this is the effect of the tides on the Earth cause it to rotate a little slower over time (this is called tidal breaking).  Other factors that are not as predictable can also effect the length of a day, like the motion of the molten mass inside the Earth.  A 2004 earthquake was so powerful that the length of the day became 2.68 microseconds shorter.  There are also unpredictable reasons we don't understand that cause the length of the day to change (in 1999 it changed by about 1 microsecond and we don't know why).  But, factors like this cause there to be such a thing as a leap second (there will be a leap second on June 30 this year).  Date systems like Julian dates and GPS time are not affected by this unless you want to convert back into normal dates and times - here at LIGO we make sure that all of our computer programs keep up to date with the leap second corrections.

Yesterday (leap day) I was leaving work by way of a staircase in the back of my building.  This faces the woods and there is a single light above them so you can see your way at night.  This is a prime place to find the varied kinds of moths that are indigenous to the area because many of them are attracted to the light and some die during the night.  I guess I got a leap day treat yesterday when I saw this moth I have NEVER seen before with beautiful pink and yellow colorings: 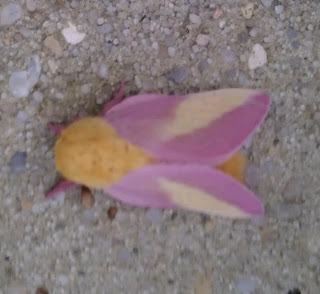 I looked this up later and discovered that this is a rosy maple moth.
Posted by stuver at 4:13 PM