The "Big Dog" in the Envelope

So, there has been a lot of excitement in the LIGO and Virgo Collaborations because we thought that we may have had a gravitational wave detection candidate from the early morning hours of 16 September 2010.  Because the potential source was localized in the vicinity of Canis Major constellation, the candidate event was informally dubbed the "Big Dog" (get it? we think we're cute).

I was especially excited since I was one of the first people to know about the event.  I mentioned in a previous blog entry that LIGO and Virgo have developed an effort to process the data that we collect rapidly so we can tell our traditional astronomy colleagues (those with actual telescopes) where to look for a potential optical signal component of the event.  I was one of about 25 scientists that were notified when a candidate event for observation was detected so that we can make sure that the event is valid before we send it out for observation.  While I wasn't the scientist on duty for this purpose at the time, I received the text message a little after 1 AM Central time (I couldn't sleep).  This was only 8 minutes after the data was collected!

It was sent out for observation and the entire collaboration began to get very excited.  This looked just like what we would expect from a neutron star-black hole binary (pair) system orbiting into each other (to make a bigger resulting black hole).  But one of the things that every scientist needs to learn is not to get overexcited and declare this to be the first direct detection of gravitational waves without making sure that this isn't a false alarm.  There are 2 ways this could be a false alarm:  1:  There is something in the environment that just so happened to make a coincident signal in all of the detectors (LIGO in Louisiana, LIGO in Washington state and Virgo in Italy) or 2:  This could be a blind injection (test).  Until we knew for sure, no one was allowed to discuss this event outside of the collaboration.  I've had to keep my lips sealed for 6 months (just like the over 800 other scientists who are in the Collaboration)!

A blind injection is a test the higher-ups in LIGO can do to make sure that the data analysis methods are doing what they need to be doing.  Basically, a very small subset of people in the collaboration (think like 2 or 3 people) inject a fake signal into the detector and this injection is not recorded anywhere like the other injections we regularly do to test things like detector calibration, etc.  The fact that a blind injection exists is sealed away (in what we metaphorically call an envelope) until all due diligence is done and the collaboration is ready to declare that the signal is a detection unless it is a blind injection (that it, we prove that it is nothing in the environment or and nothing was wrong with the detectors detectors that caused the signal).

Yesterday (14 March 2011) at the LIGO-Virgo Meeting was the big day when we opened the envelope (which turned out to be a flash drive with a PowerPoint presentation on it).  If the envelope was empty or if whatever injections were in the envelope were not the "Big Dog", then that would mean we made a detection.  The envelope was opened and, indeed, the "Big Dog" was inside and not a real gravitational wave detection.

I was not surprised - there had not been a blind injection in the run before this and everyone expected that there would be at least one.  However, there was also a big part of me that was hoping against hope that this was real.  My entire career has been dedicated to the effort of directly detecting gravitational waves and the development of gravitational wave astronomy.  If the "Big Dog" had been real, this would have been a fulfillment of the first part of my goals and the opening of the door of the second part.

Regardless, all of the effort that was put into validating the "Big Dog" up until it was revealed to be a blind injection has been a priceless exercise for the collaboration.  We even have a paper that was ready to be submitted for publication if it had been real.  Since this is something that we have never done before, we have developed skills for when we do make the first detection with Advanced LIGO.

Below is a picture (from my seat) of the title slide in the presentation opening the envelope.  This just goes to show that even if you think that scientists are smarter than you, it all depends on how you define smrt :) 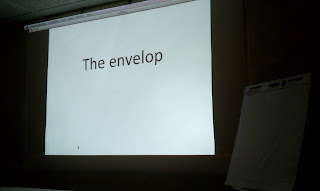