Last Day at the LIGO-Virgo Meeting

Today is the last day I am at the LIGO-Virgo Meeting in CA.  While the main meeting is over, last afternoon and today is the Education and Public Outreach (EPO) retreat.  This is different from the education work I do at the LIGO Livingston Science Education Center (that is physically on-site at one of the LIGO observatories) since the EPO group seeks to serve the all of the public (not just those people geographically near the observatories) and this work is done by all of the collaboration, in this country and around the world.

One of the fun things that have been developed recently and used for education and outreach are computer games about gravity and gravitational waves!

SPACE TIME QUEST (created by the gwoptics group at the University of Birmingham, UK)

BLACK HOLE PONG (also created by the gwoptics group at the University of Birmingham, UK)

This is a new take on the classic game "Pong" except instead of paddles, you use black holes to gravitationally move and sling a mass into your opponent's half of the screen.  Every time the mass enters your opponent's space, you score a point.  This is currently a 2 player only game (you can't play against the computer yet) and you can even use your Xbox controllers!

SLINGSHOT (created by the RIT Center for Computational Relativity and Gravitation)

The goal of this strategy game is to shoot your opponent's spacecraft on the opposite side of the screen.  However, there are planets in between that attract your projectile gravitationally (they warp space-time) deflecting it from a straight path (the game name of Slingshot refers to the fact that stars, planets and moons can be used as a gravitational slingshot to speed up spacecrafts or other masses - NASA used this to get the astronauts from Apollo 13 back to Earth when they were low on fuel).  The strategy is to account for these deflections and still destroy your opponent's spacecraft.  This 2 player game can be very addictive!  Download it here.

Talk to you next week!  (Below is a picture of me at the LIGO-Virgo Meeting taken by my friend, Cristina Torres:) 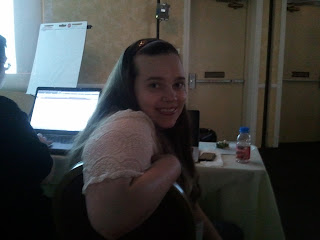 Like I mentioned in a previous post, being at the LIGO-Virgo Meeting always overlaps with my sister's birthday.  That being said:  "Happy Birthday, Brie!" 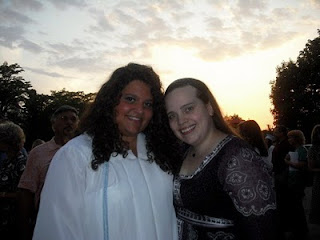 This is Brie and me at her high school graduation last May (I am much older than her [don't you dare ask how much] and no, neither one of us is adopted).
Posted by stuver at 2:51 PM