Q: How Does Einstein@Home Search for Gravitational Waves?


What about the Citizen Science project Einstein@Home? I'm running it but I don't know which GW data it's analyzing.

This is a great question and there is so much I want to tell you all about that I am going to break this down into smaller questions:

If you aren't familiar with Einstein@Home (read more, sign up), it is a screensaver that looks for gravitational waves in data collected by LIGO and other detectors like it.  Basically, users allow Einstein@Home to become part of a large supercomputer seeking gravitational waves but ONLY when the users are not using their computers.  How many times have you gone to bed at night and left your computer on?  If it doesn't have anything to do, it just sits there.  Einstein@Home gives it something productive to do that comes at no additional cost to the user.  Below is a screenshot of Einstein@Home as it is running on my computer.  It shows you where the two LIGO detectors are (the green and blue 'L' on the starsphere), where the GEO detector in Germany is (the red 'L') and where on the sky this program is looking for gravitaional waves right now (the orange cross-hairs).  To learn more about what you see on the screensaver, click here.


How does Einstein@Home get data?

Once you install the Einstein@Home screensaver, the central data servers (at the University of Wisconsin at Milwaukee) send a small portion of data to your computer for it to analyze.  Once your computer is done looking at that data, it sends a message back to the central computers telling them if there was a candidate gravitational wave in it.  Regardless of the result, 1 to 2 other computers also process the same data to make sure that they all get the same results (and we are sure that there isn't someone out tampering with the software to report false results).  If the same results are found and there is a candidate gravitational wave in the data, then it is looked at more closely by physicists who specialize in data analysis (like me - although I look for different kinds of gravitational waves than Einstein@Home looks for).


What kind of gravitational waves does Einstein@Home look for?

Does Einstein@Home do anything else?

Why, that's insightful of you to ask!  :)  Einstein@Home also processes data from the Arecibo radio telescope looking for pulsars - a special kind of neutron star that emits radio waves from their magnetic poles.  Every time that the star spins its jet of radio waves across the Earth, radio telescopes can detect it.  The data analysis in not quite the same as when Einstein@Home looks for gravitational waves, but the basic process of breaking down the data into its component waves is the same.

Knowing more about where pulsars are in our universe lets us know better where to look for them in our gravitational wave data (notice that the screensaver has crosshairs that show you specifically were Einstein@Home is looking for gravitational waves) and, since pulsars are a special kind of neutron star, we can get a better sense of how many of them are out there in the Universe which give us more accurate measures of how often we should expect to detect gravitational waves from them.

What has Einstein@Home found?

Well, since there has been no direct detection of gravitational waves yet, it is obvious that Einstein@Home has not produced a real gravitational wave yet.  However, it has found over 10 previously unknown pulsars including the fastest known spinning pulsar!

All of this would not be possible without users like you!  When all of the computing power of Einstein@Home is combined, it is within the top 20 or so supercomputers in the world!


I hope I answered at least most of your questions about Einstein@Home.  As always, feel free to ask me questions by leaving a comment on this blog or tweet me @livingligo.
Posted by stuver at 4:45 PM

I know that I haven't been posting as much as I usually do (I like to post once a week) but life gets in my way.  For example, I had a tooth break that needed fixed and both my husband and I have come down with the cold that has been making its way around the observatory.  Basically, between life and getting work done, I haven't had a lot of time.

But today is an important day since we will reach GPS time 1,000,000,000.  This time is measured in seconds from Sunday January 6, 1980 at midnight UTC (this is the official time of the planet measured at the Prime Meridian passing through Greenwich, England) without any leap second corrections to match the rotation of the Earth (astronomers use a similar time keeping method called Julian Date which is the number of days since January 1, 4713 BC without any corrections for outright changes to the calendar [like to the Gregorian calendar - which is the calendar we use today]).  Here at LIGO, this is important to us since this is how we measure the official time for everything and this time needs to be very accurate since we will never believe a potential gravitational wave detection unless it is measured at different observatories within the time it would take a it to travel between the sites - for the two LIGO observatories, the maximum time is 10 milliseconds.

Other than it being cool to watch the time roll over to one billion (like watching your car odometer roll over to 100,000 miles) this event can cause issues with the data analysis programs that we write to search for gravitational waves.  For example, I wrote a software package while I was in grad school that we still use to produce simulations to test the efficiency of data analysis software.  My baby is called GravEn (for GRAVitational-wave ENgine) and uses the GPS time to determine where the simulations will be added to the real data (this data with fake signals is never saved together so that we don't trick ourselves into thinking we saw something real).  GravEn has specifications in its programing to return the time of the simulation in whole GPS seconds in one column of the log file and the nanoseconds after that time in another column.  I have made it so that the whole-second time is returned with 9 digits and this is now an issue since the time will be 10 digits.  It is easy enough to fix, but it must be fixed!

This new 1,000,000,000 time is not going to be of any serious concern like people feared the Y2K bug to be.  Instead, all of us code monkeys (as computer programers are lovingly referred to) need to go back and make sure that we allow enough (10) digits in the parts of our programs that use GPS time.

My next blog post will be on Thursday and will answer the reader question on exactly what kind of gravitational waves Einstein@home seeks and how it looks for them.
Posted by stuver at 11:20 AM

I will get back to answering reader questions with my next post, but I wanted to mention some other things...

Free Books by Einstein on Kindle 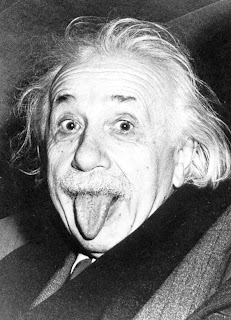 I love to read (preferably books with vampires or other creatures that go bump in the night) and my Kindle has become something I am rarely far away from.  I am also frugal so I like to browse pages that list free or reduced cost ebooks (my favorite is eReaderIQ).  Today, I noticed that there are a number of books by Einstein that are free (if you don't have a Kindle, you can still download these books and read them on the Kindle app for your computer/smart phone):
I've only read all of "Out of My Later Years" but I have also read bits and pieces of most of the other titles.  I've always been impressed by Einstein's thoughts on a wide range of topics like religion and politics, even when I didn't agree with him.  I hope that you check these out to get a unique view of who Einstein was.

A Request by "The Big Bang Theory"

I recently received an email letting me know that the producers of "The Big Bang Theory" requested permission to use the "Gravitational Waves" poster I worked on with the APS.  The request went to the APS (as the publisher), they granted it, and forwarded the legal paperwork through channels to me.  By and large, the release is what you would expect but regarding how, when, and where the producers can use the poster it states:

"in any and all media whether now known or hereafter devised, in perpetuity, throughout the universe by Producer or its assignee."

"... Throughout the universe ..."  I suppose it makes sense to cover all your bases these days.  Evolving technology has made the wording of copyright notices ever more complicated and this kind of generalization seems to take care of that.  That's great, but I am not sure that the Earth laws this release is tailored to will hold up in Martian court :)

So, take a close look at the backgrounds on this season's "Big Bang Theory" and look for the "Gravitational Waves" poster.  It will be quite a thrill to see something that I worked on glimpsed on television and my favorite show to boot! 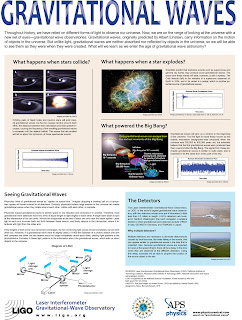