What do you hope to discover about gravitational waves that will help mankind in the future?

There are many things that we hope to observe through gravitational waves especially since they have the advantage of being able to travel through matter and come out the other side unchanged, unlike the different forms of light used in traditional astronomy.  This gives us the opportunity to observe things that do not emit light, like black holes or to observe systems that would otherwise be obscured by intervening material.

But this question asks how gravitational waves will improve mankind in the future - as in what are the applications of gravitational waves.  I get this question often when I am giving tours of the facility.  Well, the primary use of gravitational wave observations will be to understand our Universe better.  Most people's reactions to this are that our efforts can better used for other endeavors.  But this view is a little short sighted.  One of the things we forget is that when we understand more about the Universe in general, we know more about the world around us.  We are a very small part of the Universe, but we are a part of it nonetheless.

One of the direct uses for gravitational waves will be to use them to turn the Universe into our own laboratory.  There are many things that we cannot replicate on Earth, like the dense cores of neutron stars.  Under extreme conditions like this, nuclear physics and thermodynamics can theoretically do some interesting things.  However, we can't investigate those directly because we cannot create these environments ourselves.  That's when we turn to the Universe for our laboratory!  Prime candidates that will allow us to use gravitational waves to investigate this include pairs of neutron stars merging into one star, starquakes on these stars, or even rapidly rotating neutron stars with "mountains" on them (and I put mountains in quotation marks because neutron starts are believed to be so perfectly spherical that a deformation a few millimeters [a quarter of an inch or so] is 'huge').  Knowing the details of how nuclear physics and thermodynamics changes in these environments can have applications on Earth, although I can't tell you what they are yet.

Another application of gravitational wave observations will be testing Einstein's general relativity.  Even though gravity is the force that holds the Universe together, we have a very difficult time testing it since it since it is also the weakest force in the Universe (there is no negative mass to cancel the effects of positive mass like happens between positive and negative charge).  Since the mass needed to conduct experiments to test general relativity is so great, lab experiments are very few.  Again, we must turn to the Universe to be our lab.  Directly observing gravitational waves with LIGO and detectors like it will allow us to perform tests on general relativity that we have never been able to before.  For example, it is expected that gravitational waves travel at the speed of light but there really isn't anything in the theory that constrains them to that speed (they could travel slower).  Detecting gravitational waves with multiple detectors across the planet and observing light from the same source in the sky would allow us to test this.  (By the way, even though general relativity is difficult to test, every time it has been tested it has proven to be right!)

We already use an application of general relativity in our everyday lives: a consequence of special and general relativity is that time passes a different rates based on the speed of an observer or the strength of the gravitational field that the observer is in.  No matter what, your time will always be the same, but you may observe the clocks of others who are at rest or traveling slower than you ticking slower than yours (this tutorial does an excellent job of explaining how this time dilation works).  If corrections for this effect are not taken into account, the clocks on GPS satellites would quickly become out of sync and the GPS in you car, etc. would not be able to accurately locate you!

Besides the benefit to mankind due to the information the gravitational waves themselves will bring us, we have also developed a significant amount of new technology to make LIGO work.  We have developed new seismic isolation techniques that allow less than 1 billionth the energy of normal ground vibration into our instruments, we have required and received the most precisely polished mirrors, and we have developed new suspension and control systems to stabilize our optics.  These are just a few of the advancements the search for gravitational waves have made.  I am sure that there are many other applications for these new developments (although I haven't explored them myself).  Using technology developed for other purposes is a well known phenomenon in science and technology call spin-off technology.

In conclusion, we will never be able to commercialize or weaponize gravitational waves themselves.  However, they will carry information to us about some of the most extreme environments in the Universe which we can use as a laboratory for environments we cannot create here on Earth.  This information can tell us more about how the physics around us works in subtle ways that can have profound implications.  What those are are yet to be seen.  That's the exciting thing about science - you never really know the full potential of new discoveries until after the fact. 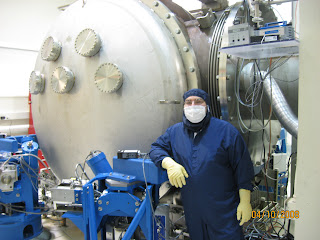 Today's picture is of an engineer (my husband Derek Bridges) dressed in clean room garb (so as not to contaminate the equipment that will be placed into LIGO's interior vacuum).  The blue stands he is leaning on are part of the seismic isolation system mentioned in the text above and the big steel chamber behind him is one of the many used to contain LIGO instrumentation in its vacuum.  This picture was taken at the Advanced LIGO testing lab at MIT.

I hope this answered your question!  If not, please feel free to ask me more about this or anything else!
Posted by stuver at 3:45 PM