Most of the visible work on Advanced LIGO has been revolving around the installation of new instruments that are needed to increase the sensitivity of LIGO about 10 fold.  While this is exciting, it can feel a little like being on the outside looking in for data analysts like myself.  But there is still much to prepare for!

The first step in that preparation starts in a few days with the first Software Engineering Run (which we abbreviate ER1 - there's longish, boring story on why it isn't being called SE1).  The goal of this is to start testing our computing infrastructure and data analysis methods with simulated data (remember, Advanced LIGO is still not complete).  For this first run, we will be simulating the channels of data that would contain information about a gravitational wave.

But what is a channel?  Just like channels on a TV, LIGO has many different data streams called channels that report on basically everything involving the instrument.  Besides the channel that will carry information about gravitational waves, we also have channels of data from seismometers that tell us how the ground is moving beneath us, channels from microphones placed around the detector that tell us about loud noises like thunder that can cause vibrations in the detector, and channels that tell us how different places on a mirror inside of LIGO is moving (and we can combine channels like this to tell if the mirror is moving up, down, sideways, front to back, rolling, etc.).  This is just the beginning of the channels we record at LIGO (there are hundreds per detector)!  We use these to cancel out unwanted movement and to double check if a potential gravitation wave is real or caused by vibrations in our environment (we would be less likely to claim a detection around the time that our seismometers indicate a train moving on the tracks a few miles away from the detector here in Louisiana).

So, we are starting out small with ER1 and focusing on just the gravitational wave channels (with simulated gravitational waves included to give the detection software a workout).  In the future, more of the Advanced LIGO channels will be simulated and included in the run.  We plan on having about 5 or 6 of these runs until Advanced LIGO is ready to give us all of the channels for real.  But, the transition from Software Engineering Run to Engineering Run should be seamless.  Engineering Runs precede Science Runs to allow us to work out any bugs in the real detector before we start using the data for science purposes - but data from engineering runs is handled like it would be if it were science data.  As more subsystems in LIGO are installed and producing data, the simulated data for those channels will be replaced with real data.  The only difference between the last Software Engineering Run and an Engineering Run will be that none of the data is simulated anymore.

It is anticipated that, by having these ER runs, that the computational infrastructure for Advanced LIGO will be ready to handle the new demands of the more sensitive detector.  We are entering a new era in LIGO where detections will be expected on a fairly regular basis (once the detector has been tuned into its design sensitivity).  We need to be able to respond quickly to potential detections to alert others in the astronomical community and for us to vet the detection in a time efficient way.  We want to be able to clear detections off of the table, so to speak, before others become backlogged.  Honestly, I am excited at the prospect of this since I have worked with LIGO since it took its first science data and I remember collaboration meetings being focused on how to make the data clean enough that we could see more than just instrumental artifacts or environmental contaminants.  Now I'm thinking about backlogged detections!

LIGO has several supercomputer clusters and one of them is located right here at the LIGO Livingston Observatory.  So, I went downstairs (from my office) and took a few pictures of our cluster today: 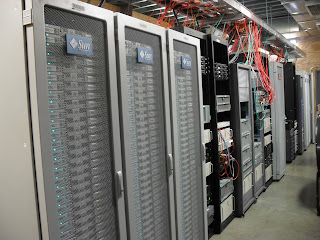 Above is a picture of the computers facing the front of the room.  Since these computers produce a large amount of heat and noise, they are isolated in their own room which also allows for the efficient use of extra air conditioning (and noise containment).  This is an odd room to be in because of the noise but also because of strong air currents moving the heat around.  The wind is noticeable and it can change quickly between a warm breeze to a cold one as you walk. 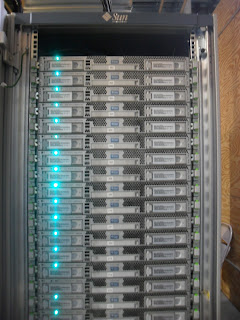 This is a close look at the computers in the racks (as we call the large rectangular container).  Each one of the horizontal shelves is a computer.  Many computers are used simultaneously to search LIGO data for gravitational waves. 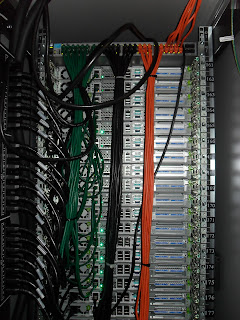 This is the back of the rack shown in the previous picture.  If you are ever chilly, this is the place to stand since the heat pushed through the fans from the computers is dumped here.
Posted by stuver at 12:57 PM