The oldest light we can see in the Universe is called the cosmic microwave background (CMB) and it is the relic light from the Big Bang.  While this light is old, it isn't quite as old as our Universe.  Before an event called recombination, the Universe was not transparent to light, so the light couldn't propagate very far before being absorbed.  Recombination happened about 380,000 years after the Big Bang and the light from this time is what we observe in the CMB.

Everywhere we look on the sky, the frequency of this microwave light is very nearly the same.  Since heat can be transmitted through radiation (such as microwaves), we can characterize this light to have a temperature of about 3 K (or about 3 oC or 5.4 oF above absolute zero - the coldest anything in the Universe can be).  Why this temperature is the same everywhere on the sky doesn't immediately make sense since the heat hasn't had enough time to be transferred across the Universe.

To explain why the CMB is essentially in thermal equilibrium in every part of the Universe, something extraordinary needed to happen...

Almost immediately after the Big Bang, it is believed that the Universe entered a period of extremely rapid expansion called inflation.  This began at about 10-35 seconds after the Big Bang and the Universe proceeded to expand its volume by about 80 orders of magnitude (that's a 1 followed by 80 zeroes) in a fraction of a second.  During this time, gravitational waves would have originally been produced on a quantum mechanical scale and then blown up to cosmological scales during inflation.  The gravitational waves from the Big Bang are exactly these fluctuations in space-time that are still vibrating from the period of inflation.  (The wavelength now is its original wavelength, i.e. about 1% of the size of the Universe as it was then, stretched by the amount the Universe has expanded since then.)


EVIDENCE OF GRAVITATIONAL WAVES IN THE CMB


An experiment called BICEP2 (Background Imaging of Cosmic Extragalactic Polarization) announced to the world a few days before this post (17 March 2014) that they did indeed detect the B-mode polarization in the CMB.  The results are cataloged here. 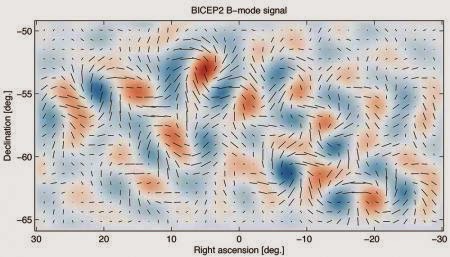 
THIS IS THE IMPRINT OF GRAVITATIONAL WAVES FROM THE PERIOD OF INFLATION!

Any time scientists think they found something that they wanted to find, we immediately set to trying to disprove what we found.  (This is discussed on this blog in regard to LIGO with the blind injections known as "The Big Dog".)  After thorough vetting and analysis of this work, it has been determined that the chance of this B-mode signal has a chance of 1 in 3.5 million of being a false detection.


WHAT THIS MEANS FOR LIGO AND SIMILAR DETECTORS


"Over the next 50 years, gravitational waves from the big bang will be detected, first indirectly by the imprint they leave on the cosmic microwave radiation and then directly, by space-based gravitational wave observatories."

You can read the rest of his prediction on NewScientist.com.

WHAT THIS MEANS FOR COSMOLOGY

The BICEP2 results do much more than suggest or support that inflation happened: it gives us some information about what happened during inflation.  The strength of the signals observed here informs us on the energy involved in inflation.  The ratio of the strength of the E-modes to the B-modes (a value referred to as r and measured here to be r = 0.2) is proportional to the energy density of the Universe at the time of inflation and this is consistent with energies needed in some of the grand unified theories (GUTs) (this is where the strong, weak, and electromagnetic forces become indistinguishable).

The BICEP2 results also serve to constrain the theories of what happened during inflation.  Several of these have been ruled out (e.g. large field inflation models are now highly unlikely).

Ultimately, these results need to be reproduced and refined by coming experiments.  This doesn't mean that the scientific community isn't confident in BICEP2's results, but science needs to be reproducible.  And in reproducing results, they are often refined and expanded upon.


This truly is an exciting time to be a scientist!