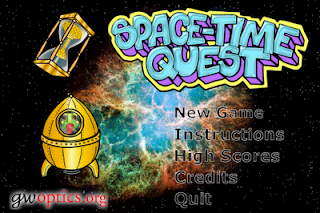 SPACE TIME QUEST
(created by the gwoptics group at the University of Birmingham, UK) 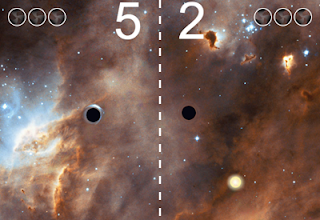 BLACK HOLE PONG
(also created by the gwoptics group at the University of Birmingham, UK)

This is a new take on the classic game "Pong" except instead of paddles, you use black holes to gravitationally move and sling a mass into your opponent's half of the screen.  Every time the mass enters your opponent's space, you score a point.  This is currently a 2 player only game (you can't play against the computer yet) and you can even use your Xbox controllers! 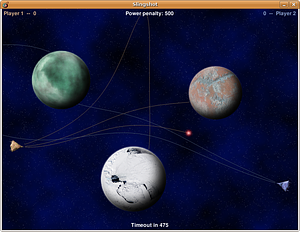 SLINGSHOT
(created by the RIT Center for Computational Relativity and Gravitation)

The goal of this strategy game is to shoot your opponent's spacecraft on the opposite side of the screen.  However, there are planets in between that attract your projectile gravitationally (they warp space-time) deflecting it from a straight path (the game name of Slingshot refers to the fact that stars, planets and moons can be used as a gravitational slingshot to speed up spacecrafts or other masses - NASA used this to get the astronauts from Apollo 13 back to Earth when they were low on fuel).  The strategy is to account for these deflections and still destroy your opponent's spacecraft.  This 2 player game can be very addictive!  Download it here.

Black Hole Hunter
(created by Cardiff University, Universities of Birmingham, Glasgow and Southampton in the UK in collaboration with the Albert Einstein Institute and Milde Marketing in Germany)

Can you hear the gravitational wave signal of two black holes colliding? 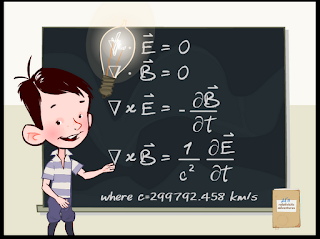 While this isn't exactly a game, Al's Relativistic Adventures is a fun animated tutorial on special relativity.  This is appropriate for everyone from middle school students to adults.  I found the lessons to be very accurate and the authors are talented at communicating complicated concepts in easy to understand ways (I even learned how to better communicate some concepts from working through this activity).  Once you are done, you are even awarded a certificate - I printed mine out and hung it in my office :)