What Have I Been Up To?

It has been a long time since I've updated and I don't feel good about that!

This time of year is always very busy in the LIGO community since one of our yearly meetings always takes place during the 3rd week of March (and it has been that way for at least a decade since I ALWAYS miss my little sister's birthday).  During the weeks leading up to the meeting, there is always a rush to get final results for whatever project a person is working on done and, when the meeting takes place during or after a science run, mature results on what we did or did not see.  That is exactly what I have been doing since my last post.

Well, that and seeing the inside of more doctors' offices than I care to think about.  I've been stuck more than a few times and had the wonderful experience of being covered in electrodes for three weeks on a heart monitor.  There's nothing to get worried about but since I had my minor kidney crisis over the summer, I have been working to resolve other issues I've previously shrugged off.

I will be attending the LIGO-Virgo Meeting this week and will try to blog on a daily basis about what goes on at meetings like this.  It really is interesting watching how a large collaboration works towards the same goal.  Let me tell you, it is no easy feat; scientists are very opinionated and we have to all work together in order to be productive.  I can think of a few instances where this was more contentious than others but as a whole the LIGO and Virgo Collaborations have some of the nicest people I've ever met in them.  And they aren't paying me to say that :)

Oh, one more thing...  I got to give a tour of the LIGO Livingston facility to a visiting scientist friend who had never been to the site before.  This gave me the opportunity to take her into some of the clean (think dancing Intel guys in those shiny suits - but ours aren't shiny) areas where assembly of the new parts for Advanced LIGO are being put together.  I rarely get to do this since I am a data analyst who spends most of her day working on a computer, but I enlisted my engineer husband to give a the grand tour.  I got a picture of us together in the clean gear (there is more that needs to be worn when you will be touching the materials, but we weren't): 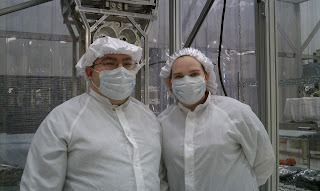 Can you tell I'm smiling?

I will write more from the meeting!
Posted by stuver at 12:15 PM