So, I am at the LIGO-Virgo Meeting in Boston right now.  As you may (or may not) know, our two collaborations are very close knit.  We schedule our upgrades to be around the same time, we always share our data, and we collaborate on our science to get the most from our work.  Being a part of a big international collaboration is exciting and gives you a new perspective on international politics - in science they exist, but are much easier to deal with since we are all working for the same goal.

Here is the gorgeous view from my hotel window: 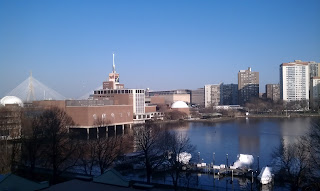 Another thing about being one of over 800 scientists and engineers working on a project is that you can feel small.  I've written before about the Impostor Syndrome - when people who are fully qualified and competent feel inadequate.  Sometimes, these meetings bring those feelings back to me.  Every time someone comes to me and asks me what I do, I feel like my worth is being weighed.  But it absolutely isn't!  After all, I do the same thing to new colleagues that I meet and I am only interested in learning more about them and maybe working with them in the future.

I was starting to feel inferior while I was traveling here...  I was sitting at my gate during a layover and a colleague I consider a friend was sitting in his seat diligently working on his computer.  What was I doing?  Reading a vampire book.  The self-loathing voice in my head immediately chimed in with, "See, there is someone who is deserves the esteem of the collaboration.  He works hard and makes the most of his time.  What are you doing?  Reading a book about things that don't even exist!"  As I was resigning myself to mediocrity, he put his computer aside and started talking with me.  During our short conversation, he paid me the most unexpected complement.  I'm not going to repeat it here, but I was speechless and ecstatic at the same time and tried not to tear up.  I smiled and thanked him because his words forced me to think well of myself (not that I told him that).  If he is reading this, you know who you are and what you said even though you don't know how much it mattered to me - THANK YOU!

I've been trying to work more on these issues but I don't ever expect to completely get over feeling inferior to my peers.  Not that I really want to - I've met many scientists who thought they were a divine gift to science and I can't stand them (even if they are right)!

The final data analysis from our last data run is finishing up and we've been talking about these results and preparing for the demands the MUCH more sensitive Advanced LIGO and Advanced Virgo detectors will place on our analysis infrastructure.  This has been a time of reorganization.  I gave a short talk about the functionality of the gravitational wave simulation software (called GravEn) I wrote while I was a graduate student.  This has been the standard software we've used to measure the sensitivity of of our burst data analysis methods.  We are also taking time to consider if there is a better way of doing it.  So far, it seems like GravEn is still the bee's knees and that makes me very happy!  (The science summary of the last burst data analysis paper is here.  The plots that show the sensitivity of our methods to different kinds of signals [the second and the third] were made using the simulations I produced.)

There have also been talks on the status of LIGO, Virgo, GEO, the Japanese KAGRA detector, and the status of what used to be the LISA space-based detector (this was a partnership between the ESA and NASA until budget issues forced NASA to cancel being a full partner).  There is progress being made on all of these fronts - even LISA (which is now led by the ESA and known as NGO for the New Gravitational-wave Observatory).  Every where you walk around the conference hotel, you see small groups working together on a project and a few very tall people in red uniforms (the Wisconsin Badgers are staying in our hotel for their NCAA Sweet 16 game tonight against Syracuse).

What Would YOU Like to Ask a LIGO Scientist/Engineer?

As part of a talk on the collaboration's outreach activities, this blog was featured!  (Those who don't know my science work will often still know me as the "Living LIGO Lady".)  It was also announced that I would like to feature interviews of gravitational wave people (scientists, engineers, etc.) on this blog.  When I originally started writing this, I wanted to make science human and accessible.  I feel like I am running out of human things about me to talk about (I'm not all that interesting).  But there are so many others with different backgrounds and stories that I would like to share with you.  I already have a list of questions I am thinking about asking (not all of them will be mandatory, of course) but I want to invite you to tell me what questions you would like to as a LIGO person?  Tweet them to me @livingligo or leave a comment here (below).  You can also email me at amber@livingligo.org.  I'm thinking of using my husband, a mechanical engineer for LIGO, as a Guinea pig (he can't cook and likes to eat, so I think I can convince him :P ).

Until next week!
Posted by stuver at 5:46 PM