Today's question comes to you from the site statistics search terms used to find this blog:

LIGO is BIG!  Instead of being looking like a traditional observatory with a dome and telescope, LIGO looks for gravitational waves (small changes in the gravity of the Universe as they pass by Earth like a ripple on a pond) by comparing the lengths of two arms, each 4 km (or almost 2.5 miles) long.  A gravitational wave will compress space in one direction (say, East-West), expand space in the other (North-South), and alternate back and forth between compression and expansion in these directions.  Below is an animation (from Wikipedia) on how a ring of matter can be compressed and expanded in orthogonal (at 90o) directions:

To best observe this stretching, LIGO is an "L" shaped detector (although many of the students that visit tell me it is shaped more like a "corner" since each side is the same length).  Because the facility is so large, it is hard to get it all in a single image.  Below is an aerial image of the LIGO Hanford Observatory in Washington state (which is in the eastern desert part of the state): ... and the aerial view of the LIGO Livingston Observatory in Louisiana (where I work): 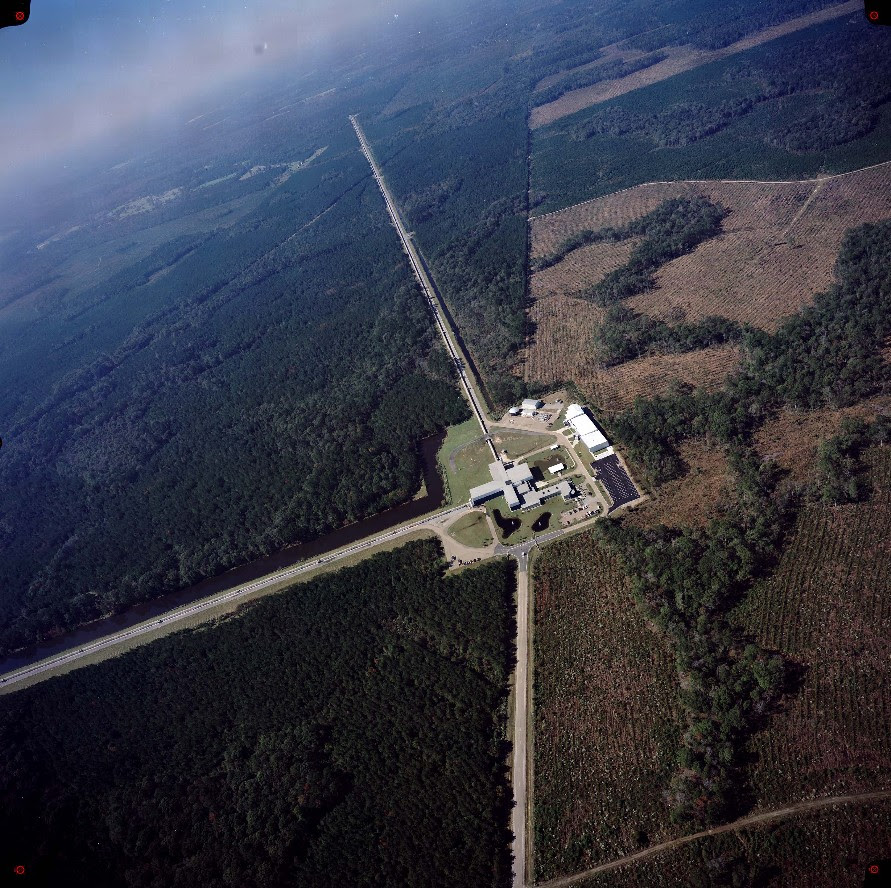 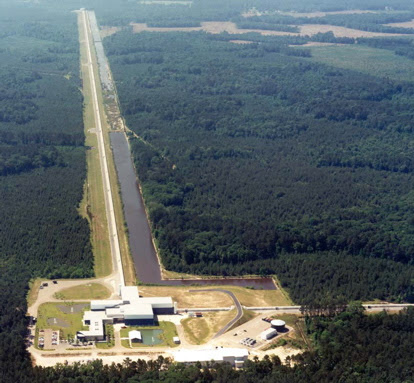 During construction, the arms needed to have an elevation above the 500 year flood line (meaning that the probability of there being a flood reaching that elevation is once every 500 years).  To do that, soil needed to be excavated from the sides to build up where the arms would be built.  In Louisiana, the water table is so near the surface that whenever you dig a hole, even a shallow one, it will most likely fill up with water.  (The locals here aren't impressed about that, but being a Northerner who loved to yell down her family's water well as a child to hear my echo, the thought of gardening and hitting water is unique!)  Another reason that the arms needed to be built up above the surface is to correct for the Earth's curvature.  Assuming the Earth is a perfect sphere (which it isn't), the Earth curves down away from the corner of LIGO a little over 4 feet over its 2.5 mile long arms.  Since the beam tubes were we shine the laser in are only about 4 feet in diameter, if we didn't ensure that the ground under the arms was perfectly flat (not flat with the curvature of the Earth), the light would never reach the ends!

ON THE INSIDE - The Control Room

So, that's what LIGO looks like from the outside.  Now, let's look at what it looks like from the inside.  The heart of the observatory is its control room where almost anything inside of the detector can be changed with the press of a button (and I've learned the hard way that you can also "break" LIGO with a press of a button as well - oops!).  Below is one of my favorite pictures (not just because I am in it) since you can see almost all of the control room in this image:

Just behind me (I'm the woman standing in the front of the image) is the on-duty scientist (left - Peter Saulson of Syracuse University) and the on-duty operator (right - Danny Sellers).  The operator maintains the instrument in working order and responds promptly to any malfunctions while the scientist ensures the quality of the data.  Together they make sure that there is as much good quality data as possible.  You can also see that there are projections of graphs and videos on the back wall (top of image) and the side walls.  These let those working in the control room know at a glance how the instrument is behaving.  Currently, this control room is being renovated in preparation for the completion of Advanced LIGO.

FROM THE INSIDE: The Interferometer

Finally, there is the detector itself (also known as an interferometer - the "I" in LIGO).  Below is an image of the corner of LIGO where laser light is split between the 2 arms: 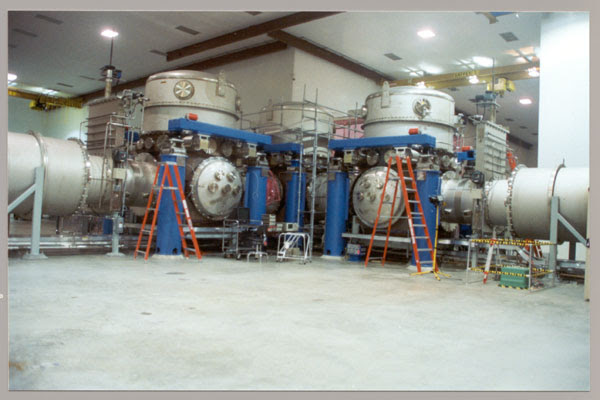 The following is a large video (~33 MB - so it may take a little while to load) that shows views of the interferometer from the inside and the outside.  I made this in July 2008 when the upgrades for Enhanced LIGO were finishing up.  There is no audio to accompany this video, as I use it when I give talks about LIGO and narrate it live.  An index is located below the movie describing what you are seeing and when.

Video Index:
0:00-0:12 - This is the input portion of LIGO.  In the far back of the image, in the white room, contains our main laser source.  The laser is infrared (wavelength = 1064 nm) so it can't be seen by the eye but it is powerful enough to permanently blind you.  In front of this white room is a pink draped room.  This is a portable clean room and inside the air is filtered so that less than 100 6-micron particles are floating around every cubic foot.  Basically, you will never see any dust motes in there.  This is needed to help ensure that the vacuum inside of LIGO (which is the largest sustained ultra-high vacuum in the world - to the best of my knowledge) isn't contaminated.  (When the camera moves to the next view, you will see the top of another portable clean room and the HEPA filters that push air down into it.)
0:20-0:27 - This is the corner of LIGO.  In the center chamber is an instrument called the beam splitter that does just what it says: it lets half of the light pass through it and go into one arm while the other half of the light is reflected off of it into the other arm.
0:30-0:34 - This is the X-arm (the arms are named after the X and Y axis of a standard [Cartesian] graph) of the interferometer where the light that is transmitted through the beam splitter goes.  This metal tube continues through the wall and outside.
0:34-0:59 - This is the X-arm as seen from the roof.  The video zooms out to the end of the arm where there is a building that houses the tip of LIGO and the mirror that reflects the light back.  The concrete barrier that protects the metal beam tube (as seen in the previous view) is also seen.  This concrete barrier protects the tube from the environment (like lightning strikes).
1:03-1:11 - The Y-arm where the light reflected off of the beam splitter travels.
1:11-1:35 - The view of the Y-arm from the roof.
1:40 - The light from both of the arms combined again at the beam splitter (seen here).
1:40-2:03 - The combined light from both of the arms goes to the output where the interference pattern (the brightness of the light) is measured to determine if the lengths of the arms changed compared to each other.
Posted by stuver at 4:21 PM