Q: Are there really Vegas odds on GW detection?

Are there really Vegas odds on GW detection?

The answer to this is yes, there were Vegas odds on the detection of gravitational waves.

This story starts in latter half of August of 2004.  Ladbrokes created a special category of wagering based on successful scientific discoveries by 2010.  These were the discovery of life on Titan, a fusion (rather than fission) nuclear power plant, finding the Higgs Boson, understanding the origin of cosmic rays, and the discovery of gravitational waves.  Originally, the odds were set at 500:1.  Well, those of us in the know thought that the broker was way off and we had a lot to gain by taken them up on their offer - so many that the broker realized the same thing.  Within just a few weeks (I cannot find the exact date but the news articles I've read implied it's between 2 and 3 weeks), the odds were slashed from 500:1 to 100:1, 10:1, 6:1, then 2:1 before they finally closed the bets.  If I wasn't a broke graduate student in 2004, I even I would have jumped on these!

If you read through these, you will note that the same LIGO Science Collaboration member is quoted: James Hough from the University of Glasgow.   I asked him about this in an email and he wrote:

Unfortunately as you know we did not succeed.

But you can imagine my excitement over the Big Dog event!!  I was on tenterhooks for weeks!"

As James notes (and as I have mentioned on this blog many times), LIGO has yet to make the first direct detection of gravitational waves.  In the end, Ladbrokes cleaned up.  I do hope that they open bets like this again though since I know that Advanced LIGO will be able to reach 1000 times more of the Universe than it did during its last data run in 2010 (when we started the aLIGO upgrades).  Instead of maybe seeing gravitational waves, we expect to be able to see tens of gravitational waves every year after aLIGO reaches its design sensitivity.  I can't wait!

If you are interested in making bets on odd things, Ladbrokes does still have a "Specials" category with all sorts of odd things you can wager on.  If you have a gambling problem, please consider contacting the National Council on Problem Gambling at 1-800-522-4700.

P.S.  As I wrote this blog post, it is to the horrible background music of uninterruptable power supplies (UPS) in my and neighboring offices beeping due to a power outage here at LIGO Livingston (loving my office with a window!).  This is when our computer staff really gets called into action - all of the computers that run the instrument AND the supercomputer that is located here need to be powered down before their UPS fails (they are only supposed to be good for minutes to give you time to shut down) and then they get to power everything back up again once the power is back on.  And there is an order to powering the computers back on!  So I guess this blog post comes to you today courtesy of my laptop battery :) 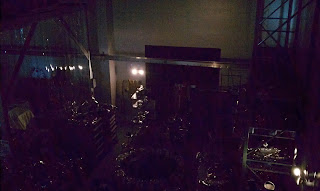 The picture above is looking down on the large assembly area (not far from my office) where systems like seismic isolation are being put together for Advanced LIGO.  The lights that you see are emergency lighting so no one hurts themselves trying to leave in the dark.  This is a view I've never seen before.