Tonight (really, very early tomorrow morning), there will be a total lunar eclipse viewable in the United States, Mexico and Canada.  Lunar eclipses are caused by the Moon passing through the Earth's shadow.  Now, if you sit down and think about it, you might ask why we don't have a lunar eclipse every month during the full Moon?  The reason is that the Moon doesn't orbit the Earth exactly on the plane (flat 'imaginary' surface) that the Earth orbits the Sun.  Instead, the plane on which the Moon orbits the Earth is very slightly tilted (about 5°).  These two planes intersect on two points of the Moon's orbit.  When the Moon is at (or very near) one of these points during a full Moon, a lunar eclipse results.

Below is a very nice animation from Wikipedia on what tonight's eclipse will look like (UT is Universal Time - subtract 5 hours for Eastern time, 6 for Central, 7 for Mountain and 8 for Pacific):

The two circles that you see show the two parts of the Earth's shadow.  The outside circle (black) is called the penumbra and the inside circle (gray) is called the umbra.  The penumbra is a region where only part of the Sun's light is blocked from the Sun and the Moon will have only subtle darkening.  The umbral region is where all of the direct light from the Sun is blocked, but the Moon has a red/orange shine to it.  This red illumination is caused by the Earth's atmosphere acting like a prism and separating the colors of light and bending the longer wavelengths (like red) toward the center of the shadow.  It is this bent light that causes the Moon appear red.  The illustration below shows how the Earth acts like a prism: 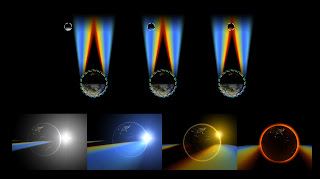 The top half of the image is looking down on both the Earth and the Moon and shows how the Earth's atmosphere separates the colors of light.  The bottom half of the image shows what the Earth may look like from the Moon during an eclipse.  (This beautiful image was also taken from Wikipedia.)

If you would like to observe the eclipse but it is too cold outside or there is cloud cover, you can watch it live on NASA streaming video here:

http://www.nasa.gov/connect/chat/lunar_eclipse.html
For those of us in the Central time zone (that would be me), the eclipse starts 11:27 pm tonight, totality begins at 1:40 am, the greatest eclipse (peak of totality) is at 2:17 am.  If you get up very early in the morning, you can see the last bit of the eclipse before 5:06 am.