I hope all my US readers has a nice Thanksgiving holiday!  It's been a while since I posted, so let me tell you a little about what I've been doing...

My last post was about how doing professional service was a part of an academic life.  That is exactly what I went off to do between 18-19 November at the APS Executive Board and Council Meetings.  The first day, I flew out to Long Beach, CA where the meetings were taking place and, in the evening, I went to the Executive Board Dinner.  I always like these more informal gatherings since it allows me to learn more about the others and am serving with and I always learn some thing new, be it about physics or some other bit of wisdom. 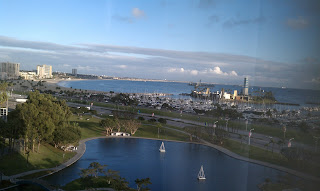 This is the view from my hotel room at the Long Beach Hyatt.  This is one of the best views I've ever had.
During the day of the 19th was the Executive Board Meeting and the Budget Committee Meeting.  This meeting is where a smaller group of people go into much more detail on topics that will be brought to the Council.  Basically, this is where many issues are debated first so that the Council Meetings proceed much more efficiently.  This was a full day of meetings for me as the Executive Board Meeting was followed by a meeting of the Budget Committee (on which I also serve).  This meeting of the Budget Committee saw the approval of the budget for next year.  While I'm not enthralled by accounting, I've learned so much about how a large society like the APS stays afloat.

The evening of the 19th was the usual Council Reception and Dinner.  This is just like the Executive Board Reception and Dinner, but we were treated to a special viewing of the Division on Fluid Dynamics' Gallery of Fluids in Motion (the Division of Fluid Dynamics meeting took place starting the day after the Council Meeting).  Then we were able to watch the incredible videos illustrating current fluid dynamics research (you can see them too here - you can also find the still images linked from that page).  My favorite one was the "Wet-Dog Shake" (found here - find the movie under "Ancillary Files" to the right of the page).

On the 20th was the Council Meeting (where I represent the Forum on Graduate Student Affairs).  These meetings are open to the membership and the usual agenda proceeds as follows:
There were several extra points to this regular agenda.  First was a debate on the merit of several proposed new prizes and awards to be awards by the APS or one of its units.  Next was a discussion on the formation of a new unit called the Forum on Outreach and Engaging the Public (units are special interest groups, called forums [non-research area specific] or topical groups or divisions [based on the number of members in the unit]).  Also, at every November Council Meeting, there is an election of 2nd year Councilors to the Executive Board and I was very happy to see colleagues of mine be elected.  The best part of the meeting was a lunch talk by one of APS members who worked in estimating the oil flow from the Deepwater Horizon Oil Spill this summer.  It was fascinating learning how these scientists went about making the estimates and why the estimates changed several times (basically, not all of the flow was oil [there was a significant amount of methane gas] and the oil was spewing into the Gulf from many different places). 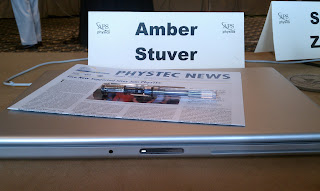 My place at the APS Council Meeting.  Even though this meeting is open to the membership, I didn't want to take a picture of the other Councilors since I didn't have their permission to post their photo on this site.
I flew home on the 21st only to ship out again to visit my family for Thanksgiving on the 23rd...

Since I went home to visit my family, I contacted my old high school and asked if they would be interested in me coming in and talking to students.  They were nice enough to have me (and my husband) and we got to talk to the AP Physics class about what we do at LIGO; I talked about physics and my husband talked about engineering).  The most rewarding thing for me was that I was in that class with the same teacher (Hi, Mr. Bowman!) when I went there.  And it was there that I first fell in love with Relativity and gravity.  So it was great to come back full circle.  I also got to give a few copies of the poster I worked on with the APS to them (FYI, I'm not beyond shameless self-promotion.)

Thanksgiving went about as well as any family gathering goes.  It was great to see everyone, but it wasn't without its own stress.

Thanksgiving day was full of baking and cooking and eating :)  It was nice to get to see my family - especially my younger siblings!

I also got to have Thanksgiving, Round 2 with my husband's family on Saturday.  That's one of the nice things about marrying your high school sweetheart - their family usually lives close to yours and you don't have to chose who to visit on the big holidays.  Needless to say, I am very sick of turkey.

That's about all I have to talk about right now.  Maybe later I will bore you with a post about catching up on work after a trip out of town :)
Posted by stuver at 5:06 PM