I hope everyone has had happy holidays!  I've been away for a while, so I thought I would let you know what I've been up to.  (Below is a picture of my husband and me on a sleigh ride at Seven Springs Mountain Resort near my family's home:) 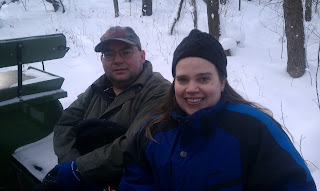 Just after the new year, I traveled back to my home and got back into my work routine.  The highest priority objective was deciding with my fellow EM follow-up (looking to see if there is anything optical in the sky where we think there may have been a gravitational wave) collaborators on who was going to present what aspect of this work at a meeting taking place at the end of the month.  I'm quite excited about this meeting (Gravitational-Wave Physics and Astronomy Workshop [GWPAW]) since it is a new format that will bring gravitational wave physicists together with astronomers.  I then wrote up the abstract for the work that I will be presenting, circulated it to my collaborators and received approval from LIGO to submit it.  (Since even small projects in LIGO depend on the work of the larger collaboration, presentations like mine which will have the authorship of "Amber Stuver for the LIGO Scientific Collaboration and the Virgo Collaboration" must have approval from those collaborations as a whole.)

I have also been on many conference calls with the different projects in LIGO I work on.  That is something that EVERYONE in the collaboration must do since we are so large and spread across the country and around the globe - some meetings start VERY early in the morning so that our collaborators in the east (Australia, etc.) don't have to take calls in the middle of the night.

The other pain-in-my-butt has been getting several new pieces of software installed on my personal computer so that I can better collaborate with the people who are analyzing the images taken for EM follow-up.  This software is open source (you don't have to pay for it) but you don't get it in vice packages that can be installed in several minutes.  You have to run special scripts in the command line on your computer which will download the program code, compile (make it an executable program), and install it.  I have been having troubles for the last week with obscure errors that I've had to Google to try to figure out how to fix.  FINALLY, I have a package installing on my computer as I type.  Also, it has been hard at work for at least 4 hours now!  That's not unexpected since this is a huge program.  I am just happy that it is going smoothly for me now.

Also, I have applied to go to the International Conference on Women in Physics which will be held in South Africa this year.  I got my application put together (2 essays, an abstract on my scientific research I will plan to present at the meeting and a short CV).  I applied for this meeting last time (2008) and wasn't selected, but I would love to attend this meeting of women physicists from around the world.  <Fingers Crossed>
Posted by stuver at 3:49 PM