Right now, I am getting to participate in the growing field of multi-messenger astronomy.  Yes, right now!  "How can you possibly write a blog post while doing this exciting science?", you ask...  Well, because there is a lot of waiting involved.  But before I get into exactly what I am doing right this second, let me tell you a little bit more about multi-messenger astronomy...

Humans have been doing astronomy from the dawn of time by simply looking into the night sky and observing the stars and the Moon and the Sun.  But the largest advances in astronomy have come when we've devised new ways of observing our Universe.  Galileo used a telescope for the first time to discover moons around Jupiter, phases of Venus, and Sun spots.  All of these observations add up to prove Copernicus' theory that the Earth is not the center of the Universe (and this proof ended up landing Galileo under house arrest for the rest of his life).  In more modern times, we've observed the Universe with different forms of light: we've discovered pulsars when we observed the Universe with radio waves, we discovered the Cosmic Microwave Background (CMB) the first time we turned on a microwave telescope (which won the 1978 Nobel Prize in Physics for evidence supporting the Big Bang) and we discovered extraordinarily energetic gamma-ray bursts from deep space (by accident when satellites orbiting Earth were looking for gamma rays from atomic bomb detonations) whose origin we still don't fully understand.  The moral here is that every time we looked at the Universe in a new way, we discovered something we didn't expect to that revolutionized our understanding of the Universe.

Today, we can do astronomy with means other than light.  For example, neutrinos.  These are subatomic particles that have no electric charge, have nearly no mass, travel very near the speed of light and are able to pass through matter almost undisturbed.  However, these properties add up to make it very hard to detect neutrinos (did you know that there are billions of neutrinos from the Sun passing through your body every second?!).  Neutrinos are also emitted when a star dies in an explosion called a supernova.  That means we may observe the optical burst of light AND the neutrinos from a single supernova.  Any time that you can observe the same event in multiple ways, you almost always learn more than if you only observed it one way.

So, what I am doing right now is waiting for a candidate gravitational wave to come through LIGO's data analysis pipeline so that I can look at how the detectors were working and make the decision on whether to send this event out for optical observation (those of us who specialize in this take 8 hour shifts for continuous 24/7 coverage).  Since LIGO has not made a direct detection of gravitational waves yet (and we didn't expect to - more on that in another post) we expect everything we send out to be a false alarm and our telescope partners know that.  But the potential of an event being real... well, that's why I do what I do; I want to be on the front lines when gravitational wave astronomy revolutionizes the way we understand our Universe! 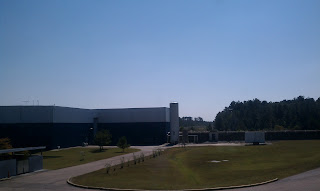 P.S.  The is the view outside my office window right now.  The building to the left contains the input, output and corner optics of LIGO (LIGO is an 'L' shaped detector).  The concrete tunnel that goes off to the right and out of the frame is one of the arms of LIGO (the other arm comes out of the back of the corner building from this view and through the area of no trees in the back - you can see it if you look close).  Each of the arms are 4 km long (in our everyday units in the United States, that is about almost 2.5 miles).  The white silo in the middle of the view is filled with liquid nitrogen (at a temperature of −321 °F) that we use to help maintain the vacuum inside of LIGO (there is over 300,000 cubic feet of vacuum at one trillionth the atmospheric pressure inside of LIGO).
Posted by stuver at 12:58 PM