At 11 am CDT time, the announcement was made at the Livingston Observatory that the detector was laser safe (meaning that the lasers are off and no eye protection is needed to approach the instrument).

The 4 km arms (which have not been exposed to the atmosphere for about a decade) have been sealed to preserve their vacuum and the chambers holding the optical instrumentation are being vented (allowing the atmosphere back into the individual chambers).

Work has now officially commenced on the Advanced LIGO installation (whose design and assembly has been going on for years now).

Advanced LIGO is expected to be online around 2014.

Of course, there will be much more detailed information coming to you on this blog in the future.  I just wanted to share this moment in history with you.  I have been privileged to work on LIGO since before our first science data was taken on August 23, 2002 (which is not nearly as long as the pioneers of LIGO have been laying the foundation) and feel even more privileged to be a small part of its history today.  I can't wait for what's to come. 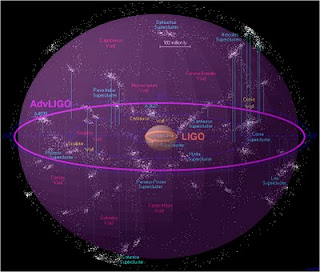 The illustration above shows the anticipated "reach' of Advanced LIGO (the purple sphere) compared to Initial LIGO (the orange sphere).  Each small dot in the figure represents a galaxy.  Since the volume of space that the instrument can see grows as the cube of the distance, this means that the event rates will be more than 1,000 times greater.  Advanced LIGO will equal the 1-yr integrated observation time of Initial LIGO in roughly 3 hours. (Galaxy map credit: R. Powell, www.atlasoftheuniverse.com.)
Posted by stuver at 10:26 PM