If Frankenstein's Monster and Amber Had a Baby... 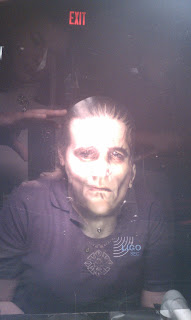 Scary right...  I don't think that I need to worry though since Frankenstein's Monster is most likely infertile due to him being the walking dead and what not.  :)

This picture was taken at one of the portable exhibits we had on display in the "Spooky Room" at the LIGO Science Education Center's Science Saturday (a public open house).  If you will be in the Livingston Parish area on any 3rd Saturday of the month, stop by between 1 to 5 pm to have some fun with us.  This scary image was made by placing a picture of said monster on one side of a partially refelcting mirror and your own face on the other.  When both faces are illuminated with light, you get the gruesome combined image you see above.

Another interesting exhibit in our "Spooky Room" was the dry ice comets.  This small demonstration is taken from a larger exhibit from the Exploratorium in San Francisco (almost all of the exhibits in our exhibit hall are made by them) called Icy Bodies.  A flat piece of dry ice dropped on the surface of a shallow body of water will skim around on top the water and produce a vapor trail to look like a comet (and sometimes spin around making vapor swirls). 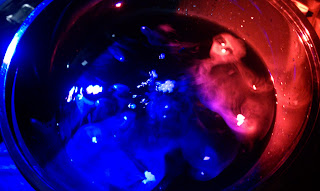 The picture above is when about 4 of our 'comets' were petering out (which allowed some of the vapor to clear away to get a nice picture).  The bubbles in the middle are from a large piece of dry ice simmering at the bottom of the bowl (that's why you need flat pieces for the simulated comets, otherwise dry ice sinks).  "Bubble, bubble, toil and trouble..."

There was much more to do at the Open House.  There is playtime in the exhibit hall: 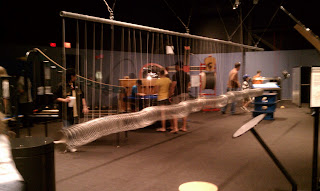 And then a screening of "Einstein's Messengers", a short documentary about gravitational waves and LIGO.  This is then followed by a tour of the control room by yours truly.  Finally, there is a science demonstration show (which lasts about 15 minutes to a half an hour) which is fun for the whole family.

Today, I got to interact and give observatory tours to about 100 people.  Like I've said before, I love giving tours since I get to show off what I do and answer people's questions about it.  A bonus of working on the Science Saturday today...  I got to play with the bit of left over dry ice.  Wah-ha-haaa!

The local newspaper (The Advocate) visited LIGO to do a story on our Science Saturdays this past February and includes a great picture of the control room (including me - and I really like this picture even though I rarely like pictures of myself).  You can read it here.

Also, if you in the Hanford, Washington (state) area, you can visit out sister LIGO observatory at their open houses at 3:00 pm on the fourth Friday and at 1:30 pm on the second Saturday of the month.  Read more about it here.
Posted by stuver at 12:38 AM