I've just returned from a week long trip to Nebraska for 2 conferences, one in Lincoln and the other in Omaha.

The Lincoln trip was for a special workshop on Using Astronomy to Teach Physics (UATP).  The goal of this workshop is to bring educators in physics and astronomy together, share the information on the state-of-the-art science projects in their fields and then breakout into small groups to identify ways to bring this frontier science into the undergraduate physics curriculum.  I put together a professional poster (see my post on the different types of posters for more information on scientific posters) on the educational work done in the Science Education Center (SEC) at LIGO, both locally and nationally as part of the LIGO Scientific Collaboration's Education and Public Outreach (EPO) group [this group has just announced its partnership with the 2012 US Science & Engineering Festival].  (I will put a link to this post as soon as it becomes publicly viewable.) While I was making this poster, I found pictures of all of the SEC staff and myself engaging students and the public in some way.  For my picture, I found one that I adore (which is shocking since I hate nearly all pictures of myself) that shows me talking to school students while giving a tour of the LIGO control room:

I found this workshop particularly interesting for 2 reasons: 1) there were talks on the different frontier astronomy projects to make sure everyone in attendance at least had a working knowledge of what the state-of-the-art is and 2) there were breakout sessions where groups who were interested in similar goals met to discuss actionable ways to incorporate the new astronomy into the undergraduate physics curriculum.  My big project that I am now working on as a direct consequence of this is a document I intend to publish in the American Journal of Physics on connections between the basic physics concepts taught in the undergraduate physics courses and the technology that makes LIGO possible.  For example:


LIGO is looking for gravitational waves that will change the length of its 4 km arms less than 1/1000th the diameter of a proton (that's 0.000000000000000001 meters).  At this length scale, one must consider the effects of quantum mechanics.  So, here's the issue: the thermal vibration of the atoms in the mirrors used in LIGO is going to be much bigger than the "big" gravitational wave cited above.  How can LIGO possibly hope ever detect gravitational waves distinctly from this thermal mirror vibration?  (The 'no math' answer is at the end of this post.)

After publication of this document, I am thinking about approaching LIGO's EPO group to propose that we create a web site to support this kind of effort.  Basically, I would like to take the document apart and use it to make a skeleton for the web site.  Then, any time a LIGO member has a homework question, activity, etc. that they use in their classroom, they can contribute that content to the site so that anyone who is interested can also use that content.

After 3 days in Lincoln, I then went to the American Association of Physics Teachers (AAPT) Summer Meeting in Omaha.  There I got to make new friends in the Physics Instructional Resource Association (PIRA) and we did something together just about every night (which, if you know me, is remarkable since I am the type to hole up in my hotel room during down time).  I also co-presented an invited talk on LIGO outreach using demonstrations with my colleague Kathy Holt.  Demonstrations are really at the core of the outreach we so since we do demonstrations with teachers and give them the tools they need to take those demonstrations back to their classrooms, we do demonstrations during public open houses and there is often a demonstration or two when we work with student field trips.  It was great doing this talk with Kathy since the combination of our backgrounds (she was a teacher before working at LIGO) give different and useful perspectives on what we do in the SEC.

Then, besides going to other talks, I also had some academic service obligations.  I believe that I have mentioned that I am on the APS Forum on Education (FEd) Executive Committee.  Even though the AAPT is not affiliated with the APS, they work together closely since they both serve physicists but with different focus.  Because of this, the AAPT Executive Board meets with the APS FEd Exec. Comm. to coordinate efforts and we had a good lunch meeting this year.  I am also on the AAPT Committee on Graduate Education in Physics and this committee also met to make plan for the upcoming AAPT Meetings and to discuss the broader impact activities we are undertaking.

In past blog posts, I have included pictures of the city I happened to travel to as seen from my hotel window (see Long Beach, Milwaukee, Anaheim).  The view out of my window was a horrible view of a parking lot and another hotel.  Fortunately, the view from my colleague's room was much better (she got a room in the main hotel for the conference and I didn't since I waited too long to make my reservations).  So, here is the view of Omaha from the window: 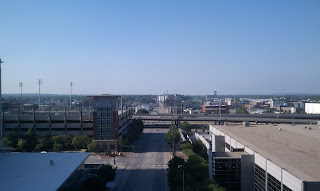 OH!  One more thing...  When I was flying from Omaha (whose airport in actually in Iowa), the north terminal of airport of evacuated for a "suspicious package".  Luckily for me, I was flying out of the south terminal.  Once I got home, I found out that the hours long closing was due to someone's physics classroom apparatus that got TSA's panties in a bunch (it went through security as a carry-on).  I suppose it's good that they were awake enough to think something suspicious but what concerns me is that it is almost a certainty that the same thing was carried on the plane to get to the meeting at all.  I guess it wasn't as threatening then :)

Answer to the quantum mechanics question posed above (highlight text below to uncover the answer):

The thermal vibration of the mirror's atoms would indeed make it impossible to measure a gravitational wave only if the laser was so well focused as to only shine on the area of a few of the mirror's surface atoms.  Fortunately, that is not the case in LIGO!  The beam spot on the mirror is about 10 cm (4 inches) in diameter.  In that area, there are MANY surface atoms that are vibrating.  By observing this large area, LIGO effectively averages over the vibration of all of the atoms that the light falls on yielding a zero net motion.  Thus, LIGO works just fine!
Posted by stuver at 11:05 AM