Questions to be answered...

Wow... I can't believe the response that I got to my open call for questions!  I am so happy to see the interest in LIGO (and science in general) and I'm eager to start answering questions.  Here is the list of those that I have so far and who asked them (if you are unfamiliar with Twitter, the screen names listed after the @ sign are people who asked me questions through Twitter; otherwise the screen name is what was used to post a comment to my blog post):


duhoc - I love cosmology and physics but understand very little about it.  What are gravitons, in simple terms?  Answered on 25 August 2011

@AstroGuyz - You know the question on every science bloggers' mind is the Big One; "When will LIGO discover gravity waves?"  Are the prospects for gravitational wave detection good before AdLIGO goes online?  Think we'll nab it before the Higgs? Answered on 4 November 2011

@umbonfo - What about the Citizen Science project Einstein@Home? I'm running it but I don't know which GW data it's analyzing.  Answered on 22 September 2011

@HughScot - What do you hope to discover about gravitational waves that will help mankind in the future?  Answered on 26 January 2012

David Dickinson - Am curious if any "spin-off" discoveries are expected from the discovery of gravity waves... (i.e. exotic objects, new cosmological theories etc)

@EclipseMaps - What are consequences for theory of gravity/relativity if null results for gravitational waves after extended observations?  Answered on 11 November 2011

BDR - On the twitter feed it says LIGO/you look for space-time ripples; is that something that occurs naturally? If there was some kind of intentionally produced ripple effect (for time travel, maybe, or maybe just galaxy/universe disruption), would it be possible to tell that it was created by another being as opposed to a natural occurrence? Would it be possible to disrupt the universe with a big or chronic enough space-time ripple? I must know these things; tia.

I promise that I will address each of these questions in the coming weeks (and I will be sure to contact the inquirer when I answer their question so that they don't miss it).  As always, feel free to send me a question anytime and I will be happy to try and answer it on this blog!

Come back tomorrow and I will answer one of these questions (I haven't decided which one yet).  I may not answer them in order since I like to make sure I am giving you the clearest most accurate answer I can which may include consulting with colleagues. 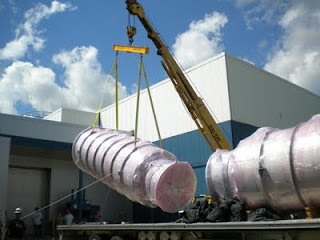 These tubes replace ones that were a smaller diameter in Initial LIGO.  We now need bigger tubes to accommodate the new upgrades near the input of the laser into the detector and near the output.

This picture is from the new LIGO - Livingston Facebook page.  If you are interested in knowing more about what is happening, like us and you will see updates in your News Feed.
Posted by stuver at 4:06 PM