Weekend at the APS April Meeting

The APS April Meeting started in full swing on Saturday 30 April.  The meeting is composed of many (~12 or so) parallel sessions during the day (form 8:30 am to 5 pm).  These sessions are composed of invited talk (about 30 minutes each) and contributed talks (about 12 minutes each).  In the evenings, there is usually a feature presentation and on Saturday night was on of the best ones I've been to.  This event was titled "The Physics of Hollywood" with panelists Bill Prady (executive producer and co-creator of "The Big Bang Theory"), Bruce Miller (executive producer of "Eureka") and John de Lancie (the character "Q" from "Star Trek: The Next Generation").  Junnifer Ouellette (author of "The Physics of the Buffyverse" was the moderator.  The picture below is from the back of the room when they were showing a clip from "The Big Bang Theory": 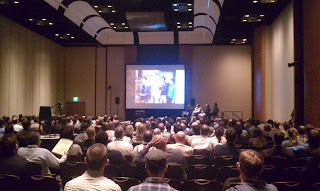 The panel at the front is hard to see here, so here is a zoom: 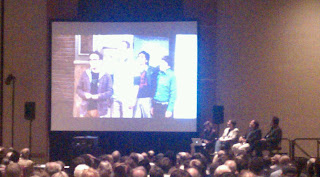 The people seated by the screen are (from right to left): Ouellette, Prady, Miller and de Lancie.  It was great!  They even answered one of the questions I have wondered about for a while:  Exactly what positions do these characters hold at the university?  They are clearly not grad students but they don't seem to be faculty members either.  Well, it turns out they are just like me...  They are postdocs!

I also had another "in the wild" sighting of the "Gravitational Waves" poster I worked on with the APS.  The picture below is the poster as it was distributed on the APS outreach table: 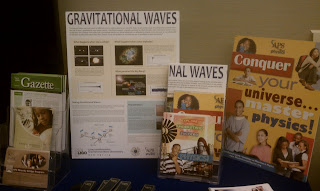 After another full day of listening to talks (I primarily go to sessions focused on gravity or education, unless there is something I don't specialize in that seems especially appealing) on Sunday, I had the Executive Committee Meeting of the Forum on Education (I serve on the Committee as an APS-AAPT Member-at-Large).  The FEd is just one of many units that members of the APS can join that address their special interest and their executive committees are the way these units are governed.  (Perhaps I should write a blog post detailing the governance structure of the APS - but perhaps that is more bureaucracy than anyone is really interested in...)  I may be very early in my career, but I have always felt welcomed by these physicists who are much more distinguished than myself.  So, I love going to these meetings (we only have one face-to-face meeting a year) and I get fed too!
That pretty much sums up my weekend at the APS April Meeting!  There are 2 more days left and I speak on the last day (Tuesday).  I am in the final stages of getting my talk approved by the LIGO and Virgo Collaborations since my talk is on their behalf.  I will write more about this process, how the talk went and about a few other things I got to do while at the meeting.
Posted by stuver at 1:18 AM