Sorry for taking so long to round out my summary of the APS April Meeting.  My talk was on the last day of the meeting (3 May) and by the time I got home the next day I was suffering from a nice case of jet lag.  I know that there is only a 2-hour time change between Pacific and Central time, but it really hurt me this time.  I am just glad that I was able to recover from it over the weekend!

Let's talk about giving talks as a member of the LIGO Scientific Collaboration.  When we speak on results that took a substantial number of people to produce (which is most of our results) we need to give talks "on behalf of the LIGO Scientific Collaboration and the Virgo Collaboration."  Not only does this let the audience know that the person giving the talk isn't taking all the credit for the work, but that the talk has also been reviewed by the respective collaborations and approved.  This process isn't meant to be censorship; it is meant to ensure that there aren't people claiming to have results that are later refuted or otherwise change before a paper is published (like "we detected gravitational waves yesterday" [we didn't, this is just an example]).  That being said, my talk was on behalf of LIGO and Virgo and discussed the work we have been doing to collaborate the EM observatories to image parts of the sky where we think a gravitational wave may have originated.  My talk needed to be done at least a few days in advance to be sent out for review to the specific committees that give the final OK and to the working groups that produced the results I was speaking on (I sent my talk out on Friday and my talk was on Tuesday afternoon).  The final approved talk that I gave can be seen in the LIGO Document Control Center (DCC) here.

The talk went well with the one exception that I ran a little long in time.  I tend to like to talk about things that get me excited, and the topic of my talk certainly did!  However, I had only 10 minutes to talk followed by 2 minutes for questions.  I did finally wrap it up before they got the hook out for me though!  :)

In a previous post, I talked about the "Physics of Hollywood" session at the APS Meeting that included some Hollywood veterans.  The APS "Physics Buzz" blog also covered this in much more detail than I did.  If you would like to read more about it, you can read the first post (Q and A with Q, et al) here and the second (Writing Science Fiction: Trying to Avoid “The Button”) here!

Finally, I want to continue what seems to be a tradition of mine in sharing some of the more mundane views from my life by sharing the view from the 15th floor of the hotel I stayed in while I was in Anaheim, CA: 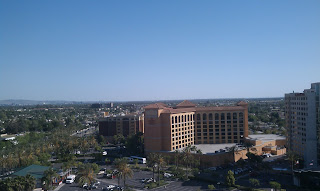 This is facing south, if I was only facing north I would have had a peek at Disneyland!
Posted by stuver at 4:13 PM