NASA Cancels LISA and More Info on the "Big Dog"

LIGO has updated its news page giving more details about the "Big Dog" event that I discussed in a previous post.  Please go here if you would like more details!


In breaking news today, NASA has officially wiped its hands of the LISA (Laser Interferometer Space Antenna) project.  Before today, this was a NASA/ESA collaboration to build a space-based detector (similar to LIGO) orbiting the Sun 20 degrees behind Earth in its orbit.  Below is an animation by the Rutherford Appleton Laboratory, UK that shows the LISA satellites in orbit around the Sun (be patient, it will seem like the animation isn't working for the first second or so):


LISA is important to exploring the Universe with gravitational waves since it will be able to detect gravitational waves with very low frequencies (few cycles of the wave every second) that will be impossible to do on Earth due to the constant seismic activity that is going on (just the waves in the oceans shake the Earth constantly - this is called the microseism).  LIGO has its best sensitivity between 100 Hz - 1000 Hz which is perfect to catch the merger of dense, massive objects (like black holes) and the death throes of stars (supernovae).  [See illustration below.]  But black holes can orbit each other for millions of years before merging into one while giving off low frequency gravitational waves the entire time.  LISA would be able to detect those.  As a matter of fact, since there is such a large number of low frequency systems producing gravitational waves all the time, the major noise source for LISA was the confusion limit (when you are detecting so many gravitational waves from many sources at the same time it is difficult to distinguish one from another).  Imagine that - having a major source of noise be gravitational waves themselves!  That would be a wonderful (and unattainable) problem to have here at LIGO!

Below is a gravitational wave amplitude vs. gravitational wave frequency graph showing where LISA and LIGO are sensitive along with what sources they could detect (this is not an all inclusive list).  Note that BH = black hole, NS = neutron star, and SN = supernova: 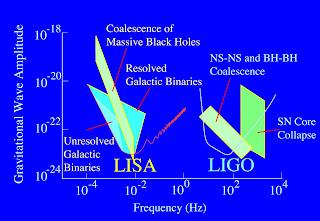 All of this does not mean that LISA is dead - it has just taken a major hit.  The ESA is still committed to this venture and there will be a flurry of new proposals to make LISA without the investment from NASA.  Will this mean that it will sacrifice sensitivity?  Perhaps.  But LISA has been a project for over 14 years now and there have been many advances in technology in that time.  I am not an expert in this so I cannot talk in specifics, but hope is not lost!  However, I have a few friends doing LISA research funded by NASA that very well may lose their jobs.

Read more about it here:  Cosmic Variance | Dynamics of Cats
Posted by stuver at 4:05 PM