I plan on giving you a first hand account of the meeting from my experiences!  Thursday and Friday I will be in the APS Executive Board and then APS Council Meetings (which I've written about in the past when discussing professional service), and then the meeting itself starts on Saturday.  I will be giving a talk on Tuesday afternoon (the last day of the meeting); you can read the abstract for my talk here.

Until the excitement begins, I wanted to share with you a sight that I see out my window from time to time: 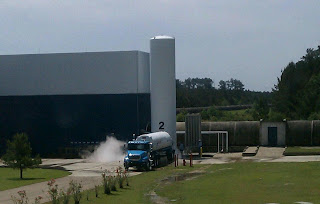 What you see here is the #2 dewar being filled with liquid nitrogen (you can see a condensation cloud to the left of the truck).  There are 4 such dewars on site, two on each arm with one being just outside of the corner of LIGO and one just before the end of the arm.  This liquid nitrogen is used to cool segments of the arms to near absolute zero (about 77 K) so that any stray gas that may have been introduced into LIGO (this includes residual gas from work being done within an end or corner chamber) freezes to the side of the segment and does not contaminate the vacuum in the rest of the arm.  The arms themselves have not seen atmospheric pressure since around 2000.

LIGO is one of the largest ultra-high vacuums on the planet with over 300,000 cubic feet of volume with a pressure about 1 trillion times less than the atmosphere.  And the scene above is one of the ways we are able to maintain such a high quality vacuum over long periods of time.
Posted by stuver at 5:10 PM