Previously, I have blogged about how gravitational waves can help mankind.  In that post, I noted that observing gravitational waves will allow us to perform unprecedented astronomy, investigate physics in extreme situations that cannot be replicated on Earth, and allow us to further test general relativity.  I also noted that there have been huge advances in technology developed by LIGO scientists and engineers just to make LIGO work.  LIGO has started to document these spin-off technologies on a new webpage: LIGO Technology Development and Migration.

The page describes many methods of how new technology and techniques move from the LIGO research environment to industry or other research applications.  These modes include patents to serendipity (among many others).  I found the descriptions here interesting myself; as a scientist in the thick of it, I am not always aware of how the things I and my colleagues are developing are affecting the world outside of my own little universe.  Also documented on the LIGO Technology Development and Migration page are descriptions of some of the spin-off technology LIGO has produced.

I want to take this opportunity to tell you about just few of the spin-offs that I am most familiar with:

HOW DO YOU HANG MASSIVE OBJECT FROM A THIN GLASS WIRE?

One of the new additions to Advanced LIGO will be that the mirrors used to measure gravitational waves will be suspended like pendula from glass wires (the pendulum suspension isn't new, it is the glass wire that is new).  It turns out that the metal wires we use like to vibrate right around our most sensitive region in LIGO (about 320 Hz).  This frequency is due to the fact the the wires are made of metal.  If we use wires made from the same material as our mirror is made of (fused silica) then the frequency that they like to vibrate at is outside of our "sweet spot" region (between 100-1000 Hz).  But, our new mirror will be about 40 kg (~88 lb).  It may be surprising, but the glass wires are strong enough to support this weight (which is also the weight of a small child).


But how do you connect these delicate glass wires (they may be strong, but they are brittle)?  That is the work of Sheila Rowan, James Hough, and Eoin John Eliffe from the University of Glasgow and Stanford University.  They has developed and patented a new technology that not only bonds the wire to the mass, but also minimized contamination of the collected gravitational wave data from glass' thermal noise.  This technology has already been transferred to several optical industry vendors!

HOW CAN YOU KEEP THE SHAPE OF A LENS FROM CHANGING WHEN A LASER PASSES THROUGH IT?

In LIGO, it is very important to keep the shape of our mirrors controlled so that we can keep the laser light bounding back and forth in an arm many times before it recombines with the light from the other arms (this makes the light think that our arms are 70-100 times larger than they are and that gives a gravitational wave more time to affect the light in the arm).  Even though our mirrors are nearly perfectly reflecting, a small amount of the light gets absorbed by the mirror and this causes it to heat up.  When the mirror heats up, it warps its shape and this distortion can make it VERY difficult to keep the light focused between two mirrors that are 4 km (~2.5 mi) apart.  What to do? 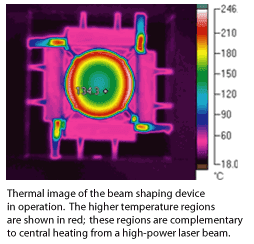 The solution to this is the heat the mirror in a controlled way so that you can cause your own distortions that compensate for the warping that the laser is causing.  LIGO has spent much effort perfecting techniques light this (I even have a friend who did his Ph.D. research on this).  This also has wider application in industrial and military environments since higher power lasers are being introduced all the time (such applications include welding and material cutting).  The ability to control the shape of the optics that control and direct a laser beam is becoming increasingly important.


HOW CAN YOU USE LIGO DATA ANALYSIS METHODS TO ANALYZE OTHER KINDS OF DATA?


This one is dear to my heart since I specialize in LIGO data analysis!  It is not just physical technology that can be reapplied for other purposes; techniques and software can as well.  Of the many different analysis methods that LIGO executes, the one used to search for continuous (long duration with consistent frequency) gravitational waves produced by things light neutron stars with a "mountain" on it (I put "mountain" in quotation marks because a neutron star is so perfectly spherical, that a deformation of less than an inch is considered a "mountain"!).  This is the analysis that is performed by Einstein@Home (which I blogged about previously here).


The data analysis challenge for these gravitational waves turns out to be similar to the challenge faced by astronomers looking for pulsars that emit either radio waves or gamma rays.  This data is collected by the Arecibo radio telescope in Puerto Rico and the Fermi gamma-ray satellite, respectively.  Using Einstein@Home, the continuous gravitational wave data analysis techniques are applied to data from these two detectors to great effect!  The number of known gamma ray pulsars (that don't produce radio waves) has been increased by a third thanks to discoveries made using the same data analysis Einstein@Home uses.  Radio pulsars are also being discovered on a regular basis with Einstein@Home; since the beginning of 2012, 22 new radio pulsars have been discovered!