Q: What is a Gravitational Wave?

Many times, when we scientists answer this question, we say "ripples on space-time".  It wasn't until I was in grad school that I really started to understand was "space-time" was.  Before that, anytime someone said the word I just nodded with an expression of recognition so I wouldn't look dumb.

So, when I talk to visitors to LIGO, I like to talk about gravitational waves (or, more specifically, space-time) in a different way.  First, let's go back to gravity as Newton described it...

There is a story about how Isaac Newton came upon the realization of gravity, often referred to as "Newton's Apple".  One day, Newton was sitting under a tree in an apple orchard.  This was one of those days when the Moon is visible in the afternoon sky.  He then saw an apple fall to the ground (some versions of the story say the apple fell on his head but I think that is too convenient).  It was then that he realized that the force that drew the apple to the ground without touching it was the same force that kept the Moon in orbit around the Earth.  This kind of force is called action at a distance.  The way two masses communicate the gravitational force between them is with a field (just like the magnetic or electric field).  Every mass (including you and me) fills up the Universe with a gravitational field that gets weaker with distance.  When objects move, the entire gravitational field of the object moves with it and every object in the Universe feels a change in the gravitational force because of this instantaneously.

So, how is this moving change in gravitational field that is a gravitational wave related to space-time?  First, space-time measures the curvature of the Universe.  It is usually visualized as an elastic grid, but this is a large simplification since space-time would be better represented by an animated 3-dimensional grid - but that is beside the point for now.  When there is no mass, space-time is perfectly flat: 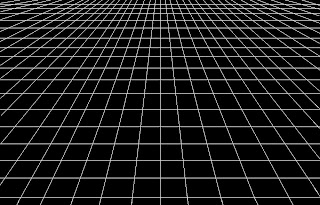 When there is mass present, space-time will be curved:

Consider another much smaller mass approaching this one: it will be deflected by the curvature of space-time.  This is gravitational attraction.

Now, we can go back to the phrase "ripples in space-time".  Now that we understand more about what space-time is, how it is represented, and how it affects mass moving through it we have a bigger picture of what gravitational waves are.  Any time a mass moves (accelerates - there are some subtleties here), that is going to create a change in the gravitational field (the curvature of space-time) and this change will ripple out into the Universe.

Below is an animation by the Jodrell Bank Center for Astrophysics of a pulsar-neutron star system merging into a black hole.  The green grid represents the surrounding space-time and the gravitational waves on it are evident:


So, what do you think?  Does this make more sense?  Let me know!

The elastic 2-dimensional grid, while suitable for discussion here, has several important features that are imperfect for use as an analogy for spacetime.  The first is that an elastic sheet will create a curvature that is related to the object's mass and its size.  However, the size of a mass has nothing to do with the curvature of spacetime.  Another is that a passing gravitational wave will affect a mass but the mass will not continue to 'bounce' on spacetime thus creating more ripples on spacetime (think of a mass bouncing on a trampoline).  There are plenty of other features that make this 2-dimensional approximation imperfect, but these are two of the most important for our purposes.

A better visualization is found in the American Museum of Natural History's short documentary called Gravity: Making Waves (which can be seen in its entirety on my Viewing Fun! page).  This is grid-like scaffolding filling 3-dimensional space in which there is a depression caused by mass.  While it still isn't a perfect representation of spacetime, it is much better than the trampoline approximation above (but also overly complicated for this discussion).  Below is the relevant clip from Gravity: Making Waves (~ 2 MB):