What I Do When I'm Not Working (and an Anniversary)

Most of the posts I've made to this blog have been almost exclusively about my work even though I want this blog to be about my life, both the scientific and the mundane.
This passed Thursday, I only worked a half day (I've been working more 6 day weeks than not for a while now) since I had a moderate migraine.  This one wasn't bad as far as all of the headaches I've had in my life, but it was more than enough to make light hurt my eyes and make me want to curl up in bed until it goes away.  So, I took care of the work that had to be done that day (like another conference call) and spent the rest of the day tending to my migraine.  This amounted to the first decent amount of down time I've had in a while.  While I wouldn't wish migraines on anyone, I am sort of glad I have mine since they force me to stop and relax from time to time (they also can hit at times when I simply can't put my life on pause and that is when I curse them).

So, what did I do with my time?  Well, first you have to know a little bit about me...  If I had 3 words to describe myself, they would be 1) physicist, 2) vampires and 3) Halloween.  I adore vampires and have read almost 200 vampire books in the last 4 years.  I also like to get the audiobook versions of books I've already read and liked to go to sleep to; if I have already read them, I won't keep my self awake to find out what happens next.  Since my eyes hurt me too much to read, I rested in bed and listened to my favorite books while I waited for my medication to take effect.  After about 2 hours of this, I felt a little better and proceeded to read a little.

This weekend was Halloween and I ADORE the holiday.  I love all of the dark fun and the idea of getting to be someone else for an evening.  I'm not one to dress up, but since I love vampire books, it is fun to think about what the world would be like if things that went bump in the night were real.

To celebrate, my husband and I went on the haunted trail at the Cajun Country Corn Maze.  (Tip:  If you go around this time of year, just go for the haunted trail since there is no line for this - there was a line almost an 500 feet long just for the maze.  Come back later in November to do the maze.)  Below is me in the pillory at the corn maze.  I think it is just scary how washed out my face looks with a camera flash: 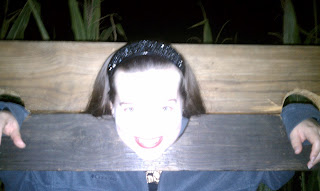 I also love autumn in general!  So much so, that my wedding was autumn themed the day after Halloween.  That's right, today is Derek's and my anniversary!  To celebrate, here is a picture of us just after the ceremony: 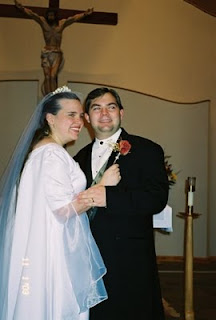